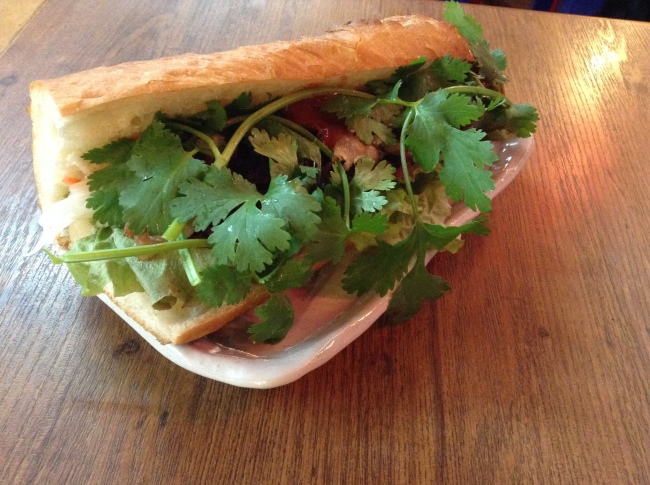 I still find it hard to believe that I can get a better banh mi sandwich in Minneapolis than I can in Tokyo. I was on a mad hunt about eight years ago in Tokyo for banh mi and then gave up after making special trips throughout the city only to be disappointed. I moved back to New York City for a short while and became addicted to banh mi. There was a shop in Chinatown near the French Culinary Institute that I would visit almost once a week, sometimes more often.

Some food colleagues here in Tokyo put this shop in Koenji on my radar. Binh Minh is the sister shop of Chopsticks which is located inside a small market near Koenji’s North Exit. I stopped by today at 11:45 a.m. surprised to see the chairs still on the tables. There was a guy in the kitchen, and I asked him if he served banh mi. He said he does, but that he doesn’t open until noon. A little late for Tokyo as most restaurants open at 11 a.m. for lunch, maybe 11:30 a.m. at the latest.

There were two options, sausage or grilled pork. I asked him about the sausage, but he advised me that the grilled pork was more delicious, and so it was decided. At noon the clock started to chime and I looked at my new friend and he said he was now open. I ordered the grilled pork banh mi, a bargain in Tokyo at only 500 JPY.

I did love the bread, a softer baguette that seemed to be toasted. There was a generous serving of fresh cilantro, which was refreshing. But, overall, it wasn’t as good as what I am accustomed to. But, I did want to put this on Food Sake Tokyo’s blog as it is the best banh mi that I have had so far in the city. I won’t make a special trip for the sandwich, but would stop by if I am in the neighborhood.

Until then, if anyone has suggestions, please do let me know! There is another shop in the city I need to check out near Takadanobaba.

Note, the shop opens at noon. Holidays on Tuesdays.