Where to go for steak in Tokyo? If our clients ask I suggest great steakhouses like the New York Grill at the Park Hyatt Tokyo. Especially now as an Argentine executive chef, Federico Heinzmann, is overseeing the kitchen. Ukai-tei in Ginza or Omotesando also is a crowd-pleaser. These are restaurants that we save for a special occasion and not spots we can pop into when we are craving a juicy steak.

Ikinari is a fun Japanese word that means all of the sudden or out of the blue. Ikinari Steak is a chain of tachigui, restaurants without chairs, yes, stand and eat restaurants. These are often casual spots where diners pop in for a quick and affordable meal. At meal times, usually around noon for lunch and about six p.m. for dinner, Ikinari Steak often has a line of customers waiting to get in.

The menu offers a variety of steak cuts such as filet, rib roast, or sirloin. The beef is Japan as well as the US. Diners go to the kitchen and specify which cut and which type of beef they want and then the chef puts the steak on the cutting board and asks you how thick you want the slice to be. After he cuts the meat is weighed and diners pay per gram. The steak is then grilled over charcoal and then the staff will bring the steak and any side dishes to your counter. Silverware and condiments are on the counter.

See the menu on the link below.

Of course this steak can’t compare to the best steakhouses in Tokyo. It does hit the spot when the craving comes for a juicy steak. It is a very casual environment and great for solo diners. This shop was in Shinbashi but there are branches throughout the city, including Ginza, Shinjuku, and Shibuya. I believe the company is expanding and the market seems to be hungry for it.

We love visiting local supermarkets when we travel. Tsuruya is a chain of supermarkets in Nagano that has been on our Go List since it was featured on a television program. It has a strong private brand (PB) program that is very popular with their customers. These items on this blogpost are all PB products from Tsuruya.

First of all, we picked up some oyaki. These are flour-based dumplings that are stuffed with different fillings. We picked up sansai (mountain vegetables), piri kara nasu (spicy eggplant), and Nozawa-na (pickled Nozawa greens). The expiration date for oyaki is often a day or two so we picked up enough for dinner on the day we came back to Tokyo. These do actually freeze well. To cook them up we just put them in a hot non-stick pan and grill on both sides.

Nagano is a big producer of apples and we picked up a refreshing apple juice. There was a big selection of jams, including kyoho, an aromatic Japanese grape and a lovely black sesame paste that has a little sugar in it (not in the photo).

There were some dried fruit, including lemon and apples. We also loved the karinto, traditional Japanese sweets that came in flavors like apple and gobo (burdock root). The karinto were well received by friends as a small gift from our travels. I only wish I had bought more.

I was so happy to find Maruyama Coffee Tsuruya Original Medium Roast Blend. Maruyama Coffee is a popular coffee shop that is based in the resort town of Karuizawa in Nagano. It is a well-balanced up with a refreshing acidity and round flavors.

Tsuruya has shops in some of the bigger cities in Nagano. The one we visited was in Matsumoto. The Tsuruya website says that it is opening a shop near Iiyama station which is on the new Hokuriku shinkansen line. Very exciting news. Worth a detour on your way to Kanazawa.

Nagano No no Hana soba

No no Hana in Ohmachi is a quiet soba shop where the master makes the noodles from scratch. It is far from the station so a taxi would be needed if you don’t have a car. Here is the kamo seiro, soba with a duck and leek dipping sauce. 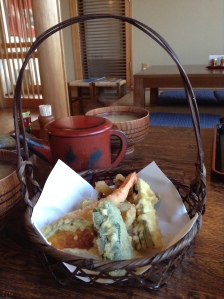 Nagano No no Hana tempura

The menu (Japanese only) was quite extensive and had many small dishes like homemade konnyaku with a mustard miso dressing, and vegetable tempura. I love this beautiful presentation of the basket with the tempura on the folded paper. I was hoping to have sansai tempura, mountain vegetables, but it was still quite cold in this part of Nagano and the sansai season had yet to begin. We were told we were a few days away. This speaks to the master, who has a friend who harvests the vegetables from the wild. While the supermarket was selling sansai, it probably came from another part of Japan.

Nagano is famous for soba, among many other things. But where to go, especially in the countryside? We asked around to friends about their recommendations, and a restaurateur told us about this lovely soba restaurant in Azumino called Okina. Azumino is a pastoral part of Nagano that has the impressive Kita Alps, Northern Japanese Alps, guarding it to one side.

The menu was very simple, only four different soba dishes. No side dishes. At first I was disappointed, as I was hoping to linger over a few small dishes before the soba. But realized that a small menu is a good thing as turnover is very quick. There was always someone outside waiting to come in, and usually the wait was not too long, even on a sunny Sunday.

This is the classic example of a shokunin, a craftsman who excels at doing one thing. In this case, it is soba (buckwheat) noodles. The soba master, Wakatsuki-san, opened the shop at the age of 40 in 1997. Prior to that he was the manager at the Tokyo branch of the famous Hakone Akatsukian soba shop.

Inside just as you walk in you can see his workshop for making soba noodles. I assume that he is there in the mornings and that he then moves over to the kitchen to cook during service. While there were waitresses, he did sometimes come out and help with the front of the house.

Check out how simple the Azumino Okina menu is. 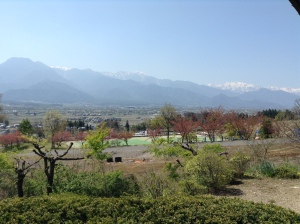 The view was amazing. We had the Kita Alps as a backdrop. This is the view from the from the shop.

The soba (buckwheat) comes from Nagano, Ibaraki, and Hokkaido. The buckwheat is milled at the shop and the noodles are made in house. The noodles had a little bit of a bite to them, which I really enjoyed. The tsuyu is made with kombu, katsuobushi, and donko dried shiitake mushrooms. The soy sauce is Okubo soy sauce from Matsumoto in Nagano.

To get to it you do need a car or by taxi, ten minutes from Akashina station in Azumino city, Nagano.

We visited Okina after a trip to the Tateyama Kurobe Alpine Route.

My first work in the wine world was at Coco Farm and Winery, just north of Tokyo. I had left New York City a year after 9/11. Coco Farm and Winery is an amazing home to students with developmental disabilities and autism. My new home was the perfect transition out of New York City. The students work at the winery every day. There were about a dozen of us working a the winery and one of those was Yano-san. Yano-san was a salaryman in Tokyo, but every weekend he would come up to help at the winery.

Yano-san eventually left his job in Tokyo and worked at Coco Farm for ten years. He and his family is now in Ohmachi, in northern Nagano. We went up to help him plant his vineyard for Vin d’Ohmachi. Yano-san could not have picked a more beautiful backdrop, the Kita Alps, which are in the background.

It takes a village.

There were many friends and family on this beautiful weekend to help plant the grape trees. We planted gewurtztraminer and cabernet franc on this day. It was hard work as the soil had lots of big rocks in it. Good luck, Yano-san. Looking forward to someday drinking Vin d’Ohmachi with you.

Here is a nice blogpost in Japanese from that day.