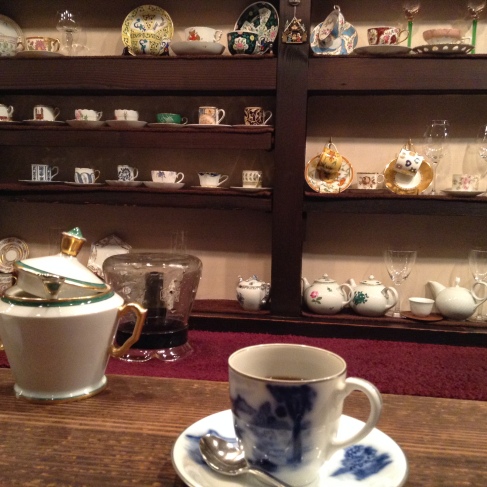 One of the great pleasures of giving food tours in Tokyo is meeting passionate people who introduce me to spots in Tokyo. The metropolis is so big that it is impossible to make it to every shop that you want to go to. Sometimes it takes someone to put a shop back on your radar. This was the case with Chatei Hatou. I first came across in it Oliver Strand’s piece in the New York Times Magazine. It’s in Shibuya, an area that I often go to. However, it is in a part of Shibuya that I rarely get to. So, it was on my Go List, but not high on the list. Until a great client who knows his coffee told me that I absolutely must go and check it out. He warned me that a cup of coffee would set me back $15. He also mentioned that while there were a variety of cups behind the counter, that customers did not select one, but that the master would size me up and choose one for me.

I finally found myself in the back streets of Shibuya. Walking in the area I realized I must be somewhere in the vicinity of Chatei Hatou and I pulled out my Go List and made a beeline for the shop. Well, beeline is a stretch, as I did get lost once. That’s good for a city where most streets do not have a name.

Just down a side street off of a major street and up a few meters from the Lacoste. The narrow shopfront sticks out on the street. It has charm and character and could have been modeled after a ski house in Europe.  The interior is dark and there is a lot of bric-a-brac on the walls on tables. I am guessing accumulated over the years as it opened in 1989. Walking in I knew I was back in Japan as it did smell of tobacco smoke. Bummer, but it wasn’t too smoky and I had to try what my friend said was one of the best coffees in the city.

I was seated at the counter, just in front of the master. I ordered a demitasse of “old beans” as it appears on the menu (900 JPY). I was told it would be bitter and he pointed to the demitasse cups. I nodded in approval and the dance began. The beans were grounded, put into a sock, and then the master used a small, flat wooden spatula and shaped the ground beans in the sock into a mountain shape. He then started to slowly and purposefully pour hot water onto the grounds. What I was amazed at was that he did not put the sock over a coffee pot or cup. He continued to pour water and the grounds started to expand and soak up the hot water. After pouring for a while he finally put the sock over a small glass carafe to capture the coffee. I was mesmerized at his attention to each detail. Hot water was poured into my demitasse as he finished up the coffee. He put the carafe down behind the counter. I am not sure if he was heating it up or what. But after about a minute of my cup being warmed he poured the coffee into the cup and presented it to me. Quite the ceremony. And, a very good cup of coffee. Dark, yet smooth, and only slightly bitter.

The other customers were a mishmash of chatty housewives, single people reading books, a group of guys holding a business meeting. It was surprisingly full at 5 p.m. on a Tuesday night. If it were smoke-free I would plan on going back soon. Am glad I took the advice of my friend. It is a unique look into the coffee culture in Tokyo.

no holidays, even open on Sundays

One thought on “Could This Be Tokyo’s Best Coffee? Chatei Hatou”