Nabé with cod (small filets on the bottom)

For visitors and residents of Japan, we are featuring seafood posts written by my husband, Shinji, a Japanese fishmonger. While in Japan, these are seasonal seafood and dishes that you should definitely look for. All of the food was prepared in our home.

A popular winter dish in Japan that is really easy to prepare, is hot pot (nabé 鍋). Just cook any vegetables, meat, or fish you like in a hot broth, usually a simple kombu dashi, for about 10 minutes. When you smell the nice aroma of the ingredients, it is ready to serve. In Japan we have small, portable gas grills that are used on the dining room table so that the nabé is always hot and diners can continue to add vegetables and other ingredients to the pot as needed. Serve with your favorite  dipping sauces like a citrusy soy sauce (ponzu ポン酢) or a creamy sesame paste sauce (gomadare ゴマだれ), and dip the cooked ingredients in the dipping sauces and enjoy. Nabé will wrap you up with warmness and a lot of nutrition in cold winters. In Japan, there are many kinds of nabé dishes as there are many types of seafood and meat.

Madara (Pacific cod) is a winter delicacy for Japanese people. Cod flesh is delicate and flaky with a light flavor. The bones contribute to a good broth. Cod goes with any kind of sauce, and moreover, it is a very affordable fish.
You can buy cod at any supermarket in Japan. I would like to give you some tips when choosing cod at your supermarket.

The first thing you should know is that madara spoils rather fast, and has a parasite (anisakis), so that you will not be able to buy cod as sashimi. All of the cod you buy at supermarkets has to be cooked before serving. It is usually sold as portion cuts. See the pictures below.
However, there could be high-end restaurants that serve very fresh, air-shipped Japanese cod sashimi that is cured with kelp (kombu 昆布), a special technique called the kobujimé method. (Note – while kelp is called kombu in Japanese, the kelp-curing method is called kobujimé, without an “m”.)

ムニエル、フライでもどうぞ = suggested for meuniere or deep-fried

加工日 kakoubi = date the supermarket cut the filet and labeled it 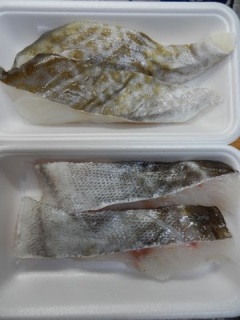 Can you tell which filet was lightly salted and frozen prior and which is fresh?

The top photo is amajio or lightly salted. The bottom photo is fresh. You can tell by the color of the flesh, the fresh cod is transparent while the lightly salted cod is opaque. Also, the bloodline, which is the bit of red in the middle of the flesh, should be bright red in fresh fish while frozen and defrosted cod will lose this color.

Cod season in Japan is from November to March. You can buy very nice fresh cod during this period. Usually, the fish is caught and sent to markets whole or as fillets. There used to be ikijimé processed (killed immediately after harvested by breaking the spinal chord and removing the blood from the fish) line-caught cod from Miyagi and Ibaraki prefectures. However, the number has dramatically decreased due to the radiation problems after the Tsunami in March 2011. Now, most fresh cod comes from Hokkaido or Aomori in the northern part of Japan. When you find fresh cod, look for 生  (nama) and  真たら or 真鱈 (madara) or  生たら (namadara) on the package. (Note – the name tara for cod sometimes changes to dara when it is preceded by ma- or nama-.)

Also, defrosted Alaskan cod fillets are available yearlong. It is usually lightly salted.  The processors import tons of whole fish by a reefer ocean container from Alaska. Once in Japan the cod is defrosted and then processed into fillets and then lightly salted. Look for ‘甘塩たら amajio tara’ on the package. 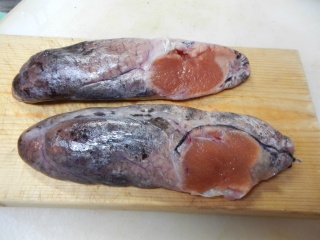 Pacific cod roe cut in half

Surprisingly, it can be hard to believe for non-Japanese, that cod roe and milt are sold at a much higher price than the fillets. These are regarded as winter delicacies more than the flesh. They have very delicate flavors and unique textures. Both are not only put in nabé with the cod flesh, but also the roe is usually served as soup (simmered with kelp broth), or nitsuké (simmered with soy sauce, saké, and mirin), and the milt is lightly boiled in hot water then dipped in a citrus soy sauce (ponzu) garnished with chopped leeks and grated daikon radish. Also, you can deep-fry or sauté the milt. 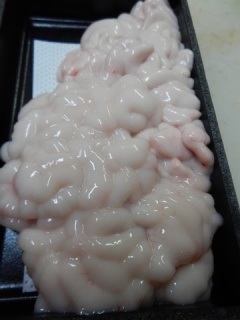 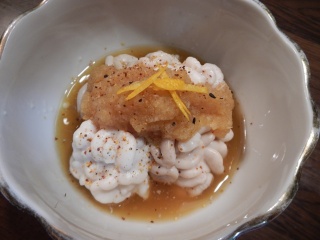 Pacific cod milt lightly blanched so the inside is still raw

Both roe and milt are usually distributed through December to March from Hokkaido or Aomori prefectures, but the madara shirako has more demand than the supply. As a result, imported air-flown fresh Alaskan cod milt is distributed from late January to March. There is little demand for the product in Alaska, so most of air-flown milt is exported to Japan all the way over the Pacific Ocean. Alaskan milt is almost the half price of the local Hokkaido product. If you can identify and recognize the taste, then you really deserved to be called ‘a king of fishmongers’.

Perhaps you have had miso-marinated and grilled cod at a Japanese restaurant. This dish was made famous by chef Nobuyuki Matsuhisa, better known as Nobu. In Japanese, this dish is called gindara Saikyo-yaki. At many Japanese restaurants this is translated into English as “miso cod”. Gindara is black cod, but actually, it is not Pacific cod, it is sablefish Anoplopoma fimbria. Sablefish is a very fatty fish while Pacific cod is not fatty at all. 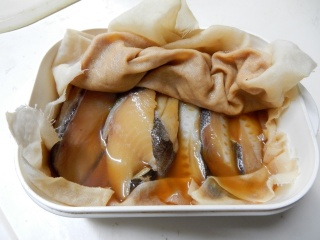 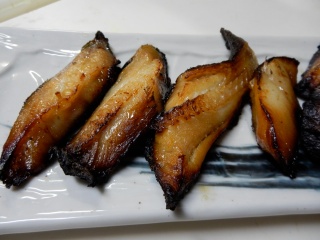