I have returned to writing for Metropolis magazine. Here you’ll find restaurant reviews and monthly columns on new restaurants and food trends in Tokyo. Here is a link to my pieces:

Thank you for following Food Sake Tokyo. We are still offering market tours in Tokyo. 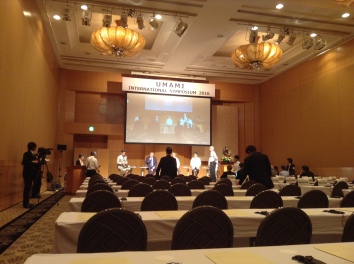 The International Umami Symposium 2016, was held in Yokohama on Sunday, June 5th. The presenters consisted of chefs and scientists and revealed many new insights. Some highlights from my notes:

Fire and fermentation are two ways to change umami in food.

At two months a baby can understand umami flavor and has an innate preference for it.

Protein with umami is more satisfying than carbohydrates.

Around the world, children are introduced to umami-rich ingredients. In Thailand it is fish sauce, Italy it is parmesan, in Denmark it is fish eggs.

From chef and scientist Ali Bouzari, “Umami is not Japanese at all. Umami is human”.

Chef Takahashi of Kyoto Kinobu discussed the traditional kaiseki kitchen which uses kombu (kelp) and katsuobushi (smoked skipjack tuna flakes) as a base to so many dishes. He also touched on the mouthfeel of different dishes

Chef Wakiya of Wakiya-Ichiemi Charo talked about growing up in Hokkaido, a part of Japan that is famous for many umami-rich ingredients and dishes like dried squid, ramen, kombu. He trained in China and learned to work with dried scallops, cured hams as well as drinking different Chinese teas that are fermented and rich in umami.

Chef Kyle is using liquid shio koji to marinade fish and meat which supports the natural flavor and adds umami. Chef’s new restaurant, Single Thread, will be opening later this year. There he makes miso-like products using koji (aspergillus oryzae). He went on to talk about how American chefs incorporate umami into their menus using the example of chef Sean Brock using green pea miso and ham broth dashi.

I was hoping to hear Professor Ole Mouritsen (author of several great books on umami and seaweed) discuss mouthfeel as his next book will be out on this topic.

Most of the food-related events I attend are chef-centric. This was a treat to listen to scientists and professors talk about the science of umami and to see how the chefs work with it in the kitchen. 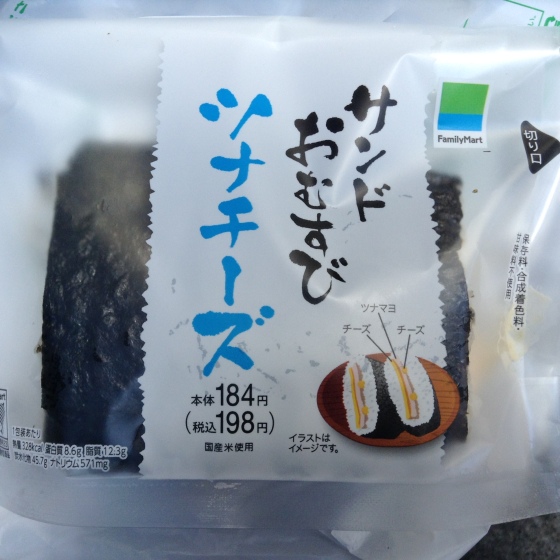 Onigiri or omusubi are savory stuffed rice balls that are often wrapped in nori. The shape is traditionally a triangle. Onigiri is something we eat at least once a week. These are perfect for picnics, hiking, as a quick meal or snack. But the onigiri is not perfect. The stuffings are concentrated in the center and the edges are not as flavorful as the middle.

The onigirazu, or sandwich omusubi, takes care of that. With the new and very popular onigirazu, every bite will include some of the stuffing. Better yet, if you are making these at home, it simply requires a folding technique. No fancy squeezing and molding to get the triangle shape.

Onigirazu, which actually means onigiri without forming or molding. Brilliant name for something that I wish I would have thought of long ago.

Cookbook shelves have about a half dozen books on the topic. Today I found a “Sando Omusubi” (sandwich omusubi) at Family Mart, a popular convenience store. It was almost twice as expensive as the regular onigiri, I guess as there is more rice and stuffings. Usually the rice balls start at about 100 JPY, but this was for almost 200 JPY.

This is the sando omusubi out of the package.

Tuna mayo, canned tuna and mayonnaise, is a popular flavor. Here you can see how the generous stuffing goes all the way to the edges.

Now that these are being sold at convenience stores we know that it is no longer a trend among mothers making these for their kids, but that it has reached the mainstream market.

Please let me know if you try these and how you think they compare to the traditional ones. I am a big fan of the new and improved omusubi/onigiri.

For those of you who are not meeting your daily recommended servings of vegetables, you can now have your vegetable for dessert. The Haagen-Dazs SpoonVege comes in two flavors, Carrot and Orange or Tomato and Cherry. I tried it with two friends so we could all share our thoughts. The Carrot and Orange reminded us of a Creamsicle®, fruity and creamy and shared that same orange color. It was good but not great. Same with the Tomato and Cherry. One friend said later in an e-mail that she thought it didn’t work out as it was cream based. I agree. Both of these could have been interesting had they been created in a sorbet style. We threw these away after we all took a spoonful. My recommendation? Buy one and see if you like it. If you do, go ahead and try the other. Better yet, stick with what they do well, flavors like Melty Caramel or Green Tea (a rich mattcha). In Japan you often come across flavors not available back home, so if you are visiting Japan, be on the look out for for Haagen-Dazs mini cups at convenience stores and supermarkets. Be sure to ask the cashier for spoons which they often keep at the check-out counter.

My suggestion? Stick with the vegetable ice cream flavors you are already doing a great job with, kabocha and purple sweet potato. Maybe bring those back with this new packaging. 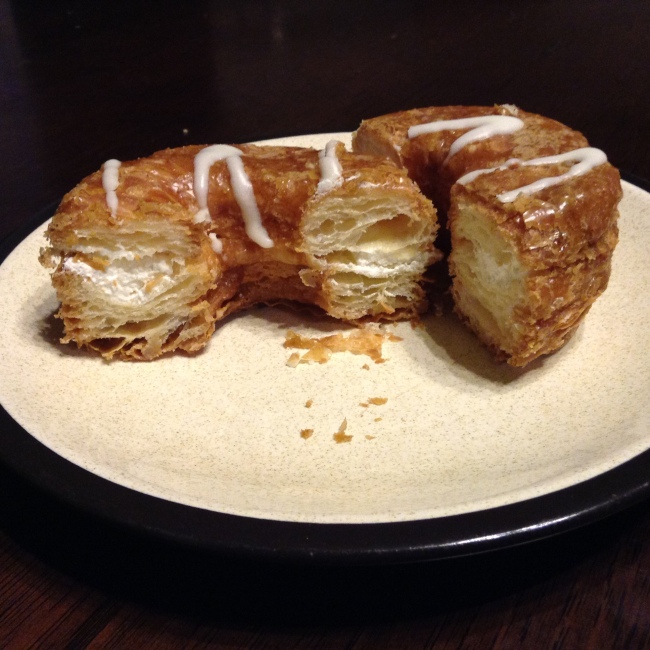 So Mr. Donut Japan has brought its version of the Cronut to Japan, the Mr. Croissant Donut. It’s not as good as the cinnamon-dusted New York Rings at the Roastery in Omotesando, but a huge improvement over the version made by Banderole. It is crispy and flakey and the whipped cream was pretty skimpy. It is definitely not worth standing in a long queue for hours for. Japanese consumers love trying new food products, so it was no surprise that the two people in front of me both were buying the Mr. Croissant Donut. On my way out of the shopping mall I saw three other customers holding the specially designed bag for the Mr. Croissant Donut. I won’t be going back for a second.

The Mr. Croissant Donut comes in three flavors and is about $2. As in the photo above, from left to right:

If you like croissants and sweets, then make a beeline to the Croissant Taiyaki shop.

Japanese food companies are brilliant at marketing their products. Kit Kat has teamed up with a famous pastry chef, Yasumasa Takagi, of Le Patissier Takagi. The latest product to hit the supermarket shelves is Kit Kat that is meant to be baked in the toaster oven. The television commercial shows chef Takagi baking the Kit Kats until golden brown. Currently there are two flavors, chocolate and pudding.

So, it was fun to put the Kit Kat in the toaster oven and watch it toast. The results were not mind-blowing. You do have to let it cool down once it comes out of the oven as it is too hot to eat. The wafers still remain crispy and I guess the only addition is a slightly toasty flavor from the baking. It’s more about being unique and about putting Kit Kat in a new context.

This is what the packaging looks like. I am curious to see if this trend continues and if the company introduces new flavors in the future. These are sold at local supermarkets.

FYI, the video says to put the Kit Kats in the refrigerator before baking in the toaster oven for 2 to 2 1/2 minutes.

If you are looking for the regional flavored Kit Kats, check out my Foodies Gifts article in Metropolis for details on where to find a big selection in Tokyo.

Once in a while you come across something that changes your food life forever. A Japanese chef girlfriend who now lives in California told me about these nori cups at Tsukiji Market. They are sold at a store that I walk by every time we do a Food Sake Tokyo tour, which is about 3-4 times a week. It is a store that we often stop by as they also sell the sushi erasers that are popular gifts. I was kicking myself for not noticing these before. These are perfect for bite-size sushi. Perfect for parties or for a fun night at home. 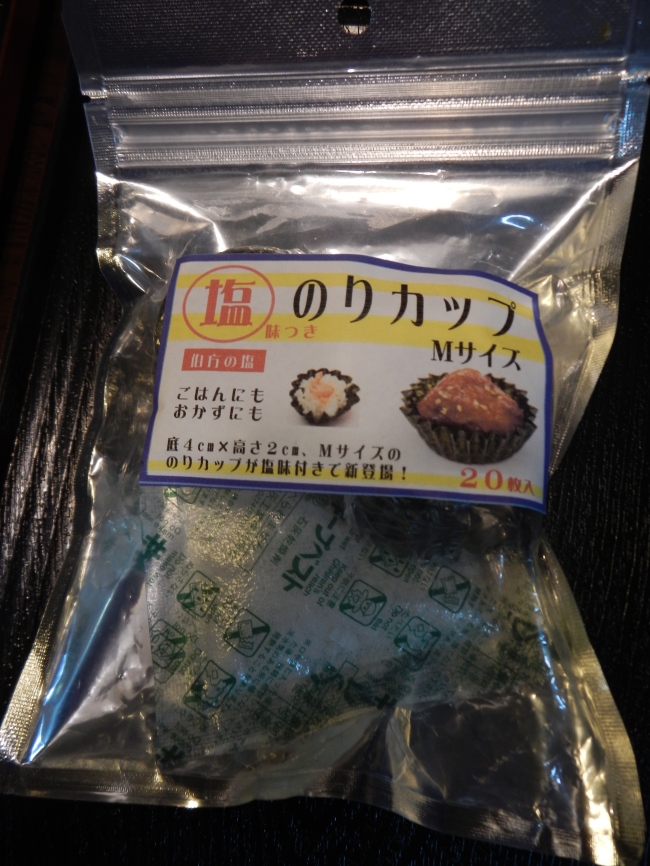 The version above are unseasoned, while these are flavored with salt. I prefer the salty ones. 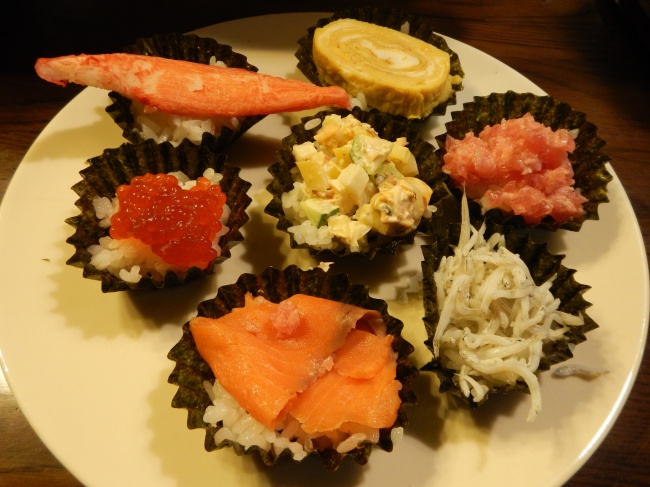 On this night we simply did salmon sashimi to celebrate the new saké cups we purchased.

There are a few shops selling the nori cups at Tsukiji Market. The easiest one to find is Orimatsu in the outer market. While here, be sure to also take a look at the erasers in designs like sushi, bento, and wagashi (Japanese confectionaries).

Followers of the Food Sake Tokyo blog have written to me to say that the nori cups can also be found at Tokyu Hands in the bento section as well as at Kappabashi. 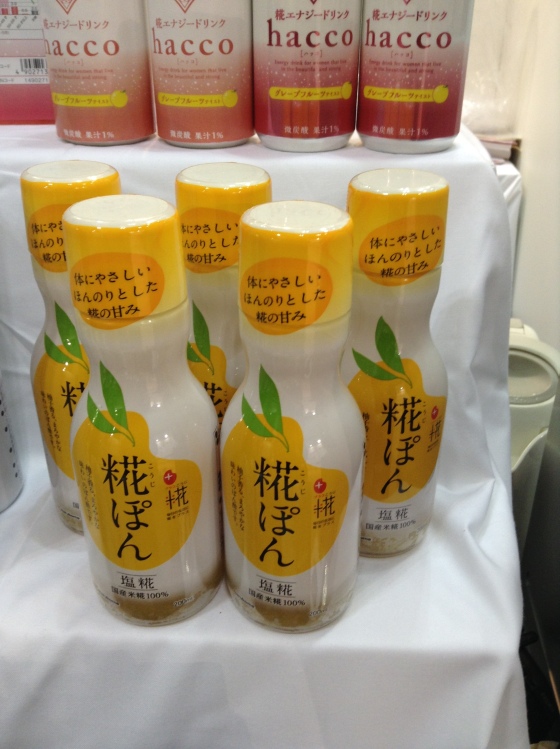 Fermented foods are an essential part of Japanese cuisine. Many staples of the Japanese pantry are made with fermented products including sake, soy sauce, mirin, miso, and vinegar. Kōji, Aspergillus oryzae, is the common ingredients in all of the products. The popularity of kōji is evident with the shio (salt) kōji and shōyu (soy sauce) kōji products that are very popular in supermarkets. At this year’s Supermarket Trade Show in Tokyo we came across many new products made with kōji. Some of our favorites include this Kōji Pon from Marukome. Pon, short for ponzu, is a citrusy tart and soy sauce that is often used for hot pots or vinegared dishes. This product is made with kōji, so with added fermented power. It is already on the supermarket shelves so look for this to put on your next salad.

This is an aged shio kōji that is aged, which rounds out its flavor and mellows it out a bit. It’s a new product that is not out yet.

These are brilliant. Dried, smoked, and sometimes fermented fish in a jar. Simply add soy sauce which will increase in umami and use as you would use soy sauce. We have a similar product at home and love the smokey soy sauce. 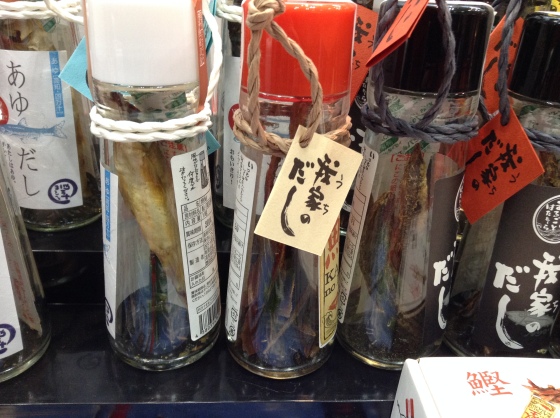 Here you can see into the bottles to see the smoked and dried fish. Some kombu as well which also adds another dimension of umami to the soy sauce. 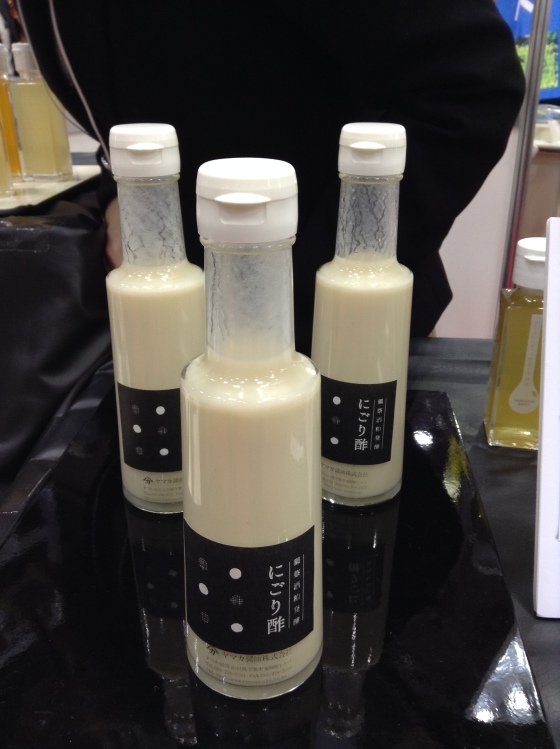 Nigori su, or unfiltered vinegar, is very interesting. It is made with saké lees from one of my favorite sake breweries, Dassai. True to its name it is creamy and has a much thicker texture than vinegar. It could be used for making pickles, salad dressings, or for making rice for sushi.

There has been an explosion of fruity, low-alcohol drinks on the market. Chuhai drinks or cocktails at about 3% alcohol. This is popular especially with young Japanese in their 20’s. The packaging is colorful and often includes pictures of fruit. The three big companies, Suntory, Asahi, and Kirin, are all active in this category.

The Suntory Chuhai line-up includes this Hiyashi Anzu Horoyoi which is one of my favorite packages with the fireworks that fill the Japanese summer skies at night.

The drinks are sweet, like drinking a fruity soda, complete with the bubbles. As for me, I enjoyed these as an aperitif on the hot days in a glass filled with ice. But one is just right. From there I prefer to go to shochu. But I know a lot of people who can not have a lot of alcohol and for that market this is perfect.