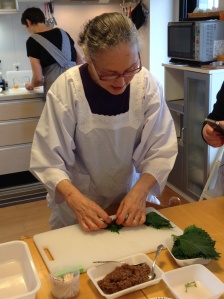 Tohoku, in northern Japan, has a rich food culture. My mother is from Yamagata and growing up I was eating many of the regional dishes like shiso maki, a nutty miso that is rolled into a fresh shiso leaf and then sauteed in sesame oil. After the triple disaster of March 11th, Elizabeth Andoh wrote Kibō, a great collection of recipes from the Tohoku region.

Today Andoh Sensei taught a class on the cuisine of Tohoku at her school, A Taste of Culture. And, as always, I walked away with new knowledge on Japanese cuisine, and inspired to push myself and study more about this Japanese food.

Elizabeth talked about the use of dried flowers and nuts and seeds in Tohoku cuisine. Today we made a dish with dried chrysanthemum petals (hoshigiku). We also used walnuts, sesame seeds, and pine nuts. Pine nuts was a big surprise, but as Elizabeth pointed out, look at all of the pine trees in Japan. The pine nuts were toasted and chopped in a food processor and then added to a tōfu dressing (shirae) that was later used as a dressing for mitsuba and loquats (biwa). 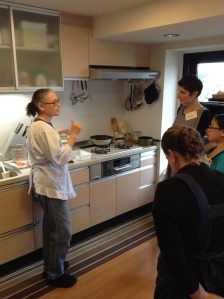 The class is part demonstration, part hands-on. Here is Elizabeth in her kitchen getting us started on making harako meshi, a rice dish made with salmon and ikura (salmon roe).

Here are the shiso maki sauteeing in some sesame oil. This is the dish I have known since I was very young. Although, I have to admit that I think my cousins in Yamagata make theirs with a bit more sugar in the nutty miso.

We were also able to try some pickles from Tohoku. One the left is a beautiful pickle, kinkon-zuké, that is made with carrots, burdock root, and cucumber rolled into kombu, that is then squeezed into a gourd and then pickled. On the right is iburigakko, a dried pickled daikon that is smoked and pickled in tamari. Both are very rich and intense in flavor.

A Taste of Tohoku

Dried Chrysanthemum Petals and Enoki Mushrooms in a Vinegar Dressing