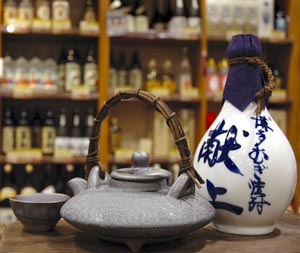 An article I wrote for Metropolis magazine on the basics of shochu:

A women’s book series known as The Sweet Potato Queens may be all the rage in the US, but here in Japan men and women are falling over themselves for the liquid version: sweet-potato shochu (imo jochu). What was once considered the poor man’s drink is now the hottest alcoholic beverage in the country, overtaking sales of nihonshu. So if you haven’t given this traditional Japanese spirit a shot, now may be the time.

For one thing, shochu is locally produced, meaning you won’t pay the mark-ups of the importer, the distributor and finally the retail shop or restaurant. Being a distilled beverage, it can sit in your house for months (in a cool and dark space) and the flavor won’t change much. And as with all food-related trends in Japan, shochu is good for you.

But what’s really fueling the shochu boom? In short, Japanese believe it’s less likely to cause a hangover. And that it can help shed pounds – a hypothesis I’m still testing, with little success. Shochu is in fact low in calories, (35 calories per 2-ounce shot) and it encourages production of enzymes that break down blood clots (a preventative measure for heart attacks and strokes). One book encourages drinking shochu on Sunday evenings, claiming it will help you relax before starting a busy workweek. Oh, and my favorite reason: If you spill it, it won’t stain the tatami.

Shochu is produced throughout Japan, although much of it comes from Kyushu. Its alcohol content typically ranges from about 25 percent up to 45 percent, which is far higher than the averages for both wine (12-13 percent) and nihonshu (15-16 percent). If and when your tolerance is high enough, exploring shochu’s varied flavors becomes the fun part. Shochu is made with everything from the common sweet potato, rice and black sugar to the bizarre, such as konbu, milk, sesame seeds and green peppers. Sweet potato has a very heady bouquet. Rice can be simple and clean. Black sugar has a sweet amami to it, while awamori is a shochu from Okinawa made with Thai rice and a bit more aromatic than the typical rice shochu.

The authority on shochu, naturally, is Sho-Chu Authority, which has six stores, including one in Shiodome and another in Tokyo station near the Yaesu North Exit. Service is better at the Tokyo station branch, but for selection and variety, Shiodome may be the world’s best. You can also pick up pre-mixed chuhai drinks at your local conbini or supermarket, in the same section as the beer.

What should you eat with shochu? Much like food and wine pairing, if you like the shochu, it will go with almost anything you are having. The rice and barley varieties tend to be a bit more food-friendly than the aromatic sweet potato but all shochu lacks the acidity that both wine and nihonshu bring to the table.

Another benefit of drinking shochu is that it can be consumed in so many ways: straight, on the rocks, mixed with hot water or as a cocktail. The common chuhai in a can is shochu blended with a variety of mixers such as grapefruit juice or ume (plum). But plain shochu on the rocks is the best way to get a sense of aroma and taste.

When you’re ready to get on the shochu bandwagon, head straight to your local shochu bar and try a variety of flavors. Or if you want to get started at home, invite your friends and host a tasting party with any range of flavors or producers. As I wait for the Sweet Potato Queens to make their Japan debut, I for one will be bonding with the other sweet potato in my life, imo jochu.