Today Japan welcomed a new sumo champion, Goeido. It’s most interesting as in this tournament had he not done well he was going to be demoted. Well, he rose to the challenge and went 15 days undefeated. Bravo!

The television cameras were on Goeido just before the awards ceremony and the announcers filled in with some banter. Following is the conversation (that I could catch) between a former sumo wrestler, Mainoumi, and an announcer. I love that in Japan talking about drinking is normal and not shunned upon.

M:  気合が入ると良く飲みますよ。When he gets into it, he can drink a lot.

A: 遊びに行きたい。(it sounded like the announcer said that he wants to go over to Goeido’s celebration party this evening.)

I had to laugh when I heard this. Such a great commentary on how we approach drinking in Japan.

Congratulations to Goeido. The first time a sumo wrestler from Osaka has won in 86 years. Omedetou gozaimasu! I hope you are drinking very good sake tonight.

*** FYI, sake can refer to Japanese nihonshu (the fermented and brewed rice drink) or to any alcoholic beverage. However, as this is sumo, which is a very traditional sport, when the announcer asked if Mainoumi if Goeido drinks sake, I assume it means nihonshu.

When I first lived in Japan in the late 80s, there was a great wrestler named Chiyonofuji, nicknamed “The Wolf”. He was very strong and handsome. I became hooked on sumo. We went to Ryogoku to the Kokugikan stadium in Tokyo and watched from the cheap seats in the last row. A decade later I was invited by a friend of mine who had corporate tickets that were in the front section. It was a night and day experience watching up close. It reminded me of seeing opera in New York City. My first time, as a college student, was standing room tickets in the back of the house. After I moved to NYC and had a budget for orchestra seats, it made a world of difference.

Here are some tips for you to enjoy your sumo experience, notably the food side of things.

The sport has gone through ups and downs in popularity, and now it is hard to get tickets. When we go we prefer to sit up front in the masuseki 升席 seats that are down on the floor. However, if you are not comfortable sitting on tatami mat for a few hours, then you should get seats on the second floor.

Go early and watch the sumo wrestlers as they come in. In Tokyo the top wrestlers walk into the stadium usually between 2 and 3 p.m. They are often escorted by lower-ranking wrestlers from the same beya. Fans line up with cameras to watch them come in. You are surprisingly close. You can clap your hands and wish them good luck, “ganbatte kudasai“. Be sure to check out the backs of their kimonos as there may be lovely designs, such as the kabuki mask on Endo’s back in pink above. On the right is Tochinoshin, from Georgia (the country).

When you go into the stadium, be sure to rent the English-language radio so you can have a play-by-play. There is plenty to see in the stadium, so allow for some time to walk around. 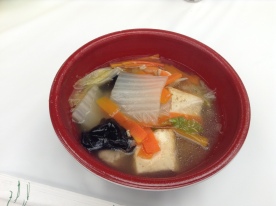 Be sure to get a bowl of chanko nabe. In the stadium there is a banquet room that has serves up a bowl of the famous hot pot that sumo wrestlers eat.

Bring your own food and beverages. Many sports venues allow customers to bring in their own food. We love bringing in our own food as that way we don’t waste time standing in line. At the Kokugikan you can even bring in your own beer, sake, or wine. Above are inari zushi, deep-fried tofu that is simmered in a sweet soy broth and stuffed with seasoned rice. If you are in Tokyo on holidays, then just stop by a depachika and pick up a bento and a bottle of saké. Ask for small cups at the department store as they usually have tasting cups on hand. Alternatively, a convenient store will have the essentials, beer, onigiri (stuffed rice balls), and chips.

Watch the wrestlers come on the dohyo. You should be in your seats by 3:45 p.m. (earlier on the final day). This is the only chance you’ll see all of the wrestlers together. At the end of the day, we also like to watch the closing ceremony. One of the wrestlers artistically swings a large bow in a dramatic fashion. The sound of the drums is a sign that the day has come to an end. 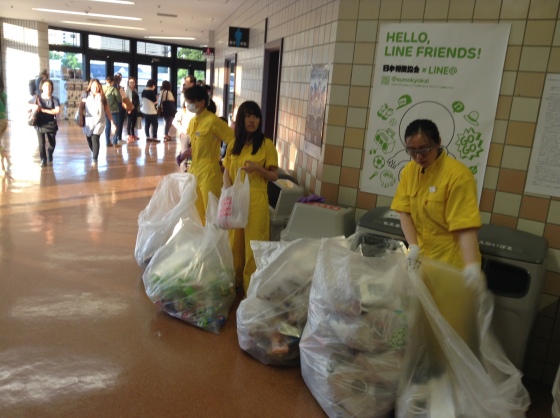 Divide your trash into paper and plastic and discard on your way out.