We recently had the pleasure of hosting chef Nico in our Food Sake Tokyo cooking classes. After he returned to San Francisco, a Peruvian friend of ours, Janice Espa, took a cooking class with him. We are pleased to share this with you.

Chef Nico Vera, founder of Pisco Trail, is a culinary ambassador of Peru based in San Francisco.

Nico shares his family’s stories and recreates the dishes he learned by watching his mother cook. He also develops Pisco-based cocktails to match, and gets inspiration from other cuisines to create his own version with Peruvian ingredients.

By fate, I have had the pleasure of getting to know Nico, and see his work first hand. The story is brief and meant to be. While searching the internet for Pisco cocktail recipes in English, beyond the ubiquitous pisco sour, I came across Pisco Trail and struck gold. That same week, I received an email from Nico regarding one of my posts on Food Sake Tokyo. His search for kaiseki led him to me, Yukari, and Shinji Sakamoto. Since then, Chef Vera has toured Tsukiji market with Food Sake Tokyo, and is one of the lucky first to do a cooking class with Shinji Sakamoto.

Now, Nico Vera has created his own take of Peruvian kaiseki (kaiseki criollo). This newly acquired knowledge, together with years of cooking, teaching, and meticulous recipe testing, are what Nico shares in his San Francisco cooking classes.

At 18 Reasons, a community cooking school in the Mission district, Nico keeps things simple and approachable. Instead of tackling too many things at once, he chooses one or two dishes and shows students how to make a few iterations of each. In the past, he’s taught arroz con mariscos, a rice and seafood dish that could be considered a Peruvian paella, showcased street food snacks, and has held dinners ranging from criollo (creole) to chifa (Chinese-Peruvian) cuisine.

For those new to cooking, or new to making Peruvian food at home, the experience based on Nico Vera’s instruction is not one bit intimidating. The chef makes a point to stop by all cooking stations (seven in total, for a maximum of fourteen students) as he answers questions and makes remarks.

During his ceviche masterclass, we were introduced to tiradito Nikkei and ceviche clasico. We also made an additional helping of leche de tigre (which translates to tiger’s milk), the juices from the lime mix sitting with the fish. Extra leche de tigre can be prepared and added to a dish, or be served in a glass on its own. It’s said to have livening effects. Personally, I don’t think it’s a hangover cure, it’s just delicious. I use a spoon to soak cancha, crispy corn kernels, and devour. 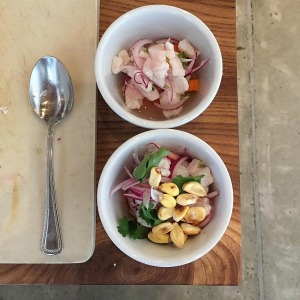 Ceviche was a dish the Inca’s mastered, no doubt. As Nico detailed, the original dish involved fish cured with tumbo fruit and naranja agria (sour orange). Later, with the arrival of the Spaniards, onions and limes were introduced. I can’t stress enough how important it is to get the right, sour, limes to make optimal ceviche at home.

Tiradito emerged several hundred years later with the arrival of the Japanese. If ceviche is already a simple dish, tiradito keeps things even crisper: fish sliced thinly rather than cubed, and onions omitted. In the Nikkei version (Japanese-Peruvian) ginger, sesame seeds, and sometimes sweet sauces are added.

Nico Vera reminded us of Nobu. He taught us a simple, yet stunning tiradito Nikkei. 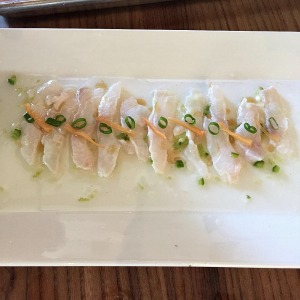 Today, there are hundreds of creative ways to serve both dishes. My absolute favorite is tiradito in aji amarillo. It combines the juices of a traditional ceviche, the stellar Peruvian chili ‘aji amarillo’ and the simplicity of the sashimi-style cut.

The most valuable tips we received while learning to make ceviche were on the importance of the lime and the chili, and how to find local substitutes. For example, using habanero and jalapeno peppers in California instead of the traditional rocoto and aji limo of Peru, yet making sure to always use limes, and not to confuse that with lemons.

Nico is placid and soft spoken, he evokes a sense of romanticism when he shares the history of the dishes he presents, and the traditions behind the way Peruvians enjoy certain foods. Because of his background as a mathematician, Nico is methodical and structured. This is clear during his class. He goes step by step, does a brief demo of the dishes, while students read through the recipes. His recipes have been perfected and kept simple.

As a Peruvian, and a home cook, I’ve found recreating Nico’s recipes a breeze. I also appreciate that they’re designed in a way that doesn’t involve cooking quantities to feed the entire neighborhood. 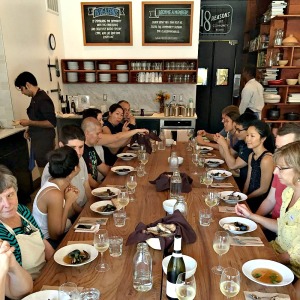 For recipes of traditional ceviche, tiradito Nikkei, and more, check out Pisco Trail.

If you’re in the Bay Area or a planning a visit, keep an eye out for Pisco Trail’s calendar at 18 reasons. Chef Nico might be holding an event then, and it will be worth your time.

Janice Espa is a Spanish-Peruvian food enthusiast; an avid traveller and inquisitive taster who explores culture through cuisine.  Janice lives in San Francisco where she writes and styles food. Her days are spent visiting grower’s markets, checking out restaurants, and shopping at specialty stores to discover goods from every corner of the world.

Feel free to email suggestions and travel tips, or to contact Janice for her own recommendations, whether you’re visiting Peru, trekking South America or doing a road trip along the east coast of Australia.