Today is the first day that Tsukiji Market is open, and the first tuna auction. The most expensive is called #1 tuna, ichiban maguro, and went for 74,200,000 JPY ($632,000 USD). The buyer was a popular sushi chain, Sushi Zanmai. The president, Kiyoshi Kimura, has bought the #1 tuna for the last six years running.

It was thought that last year would be the last tuna auction at the historic Tsukiji Market. Many issues have delayed the move to Toyosu.

President Kimura has said that he will cut the tuna at 2:00 p.m. at his Tsukiji Market main shop. He will sell the tuna at regular prices. The fatty tuna, ootoro, should sell for 10,000 JPY ($100) per piece, but he’ll sell it at regular prices, so 390 JPY ($4). As tuna is a big fish, it is actually better for it to be aged for a while for best flavor and texture, but it’s hard to resist having a bite of history.

It is important to understand the value of the tuna is not worth $632,000 USD, but that this is a popular marketing and PR opportunity for whoever buys the winning tuna. The media coverage alone on television is priceless. Every major news channel covered the event and followed the tuna to Sushi Zanmai. Interviews were held all morning and in the afternoon. The coverage will extend to the evening. Tomorrow’s print media will also have it on the front of almost every paper. So yes, it’s great publicity for the media-hungry Japanese market.

Tuna by the Numbers: 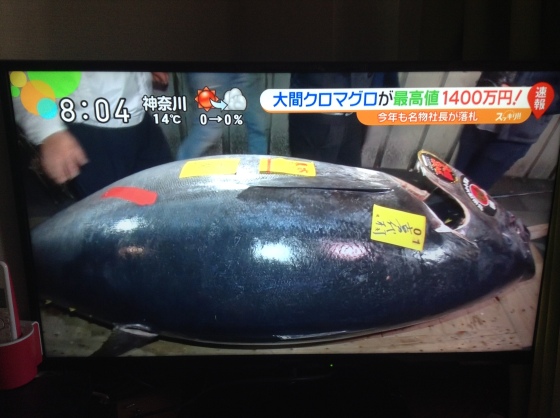 Graph of the winning tuna price over the last ten years. 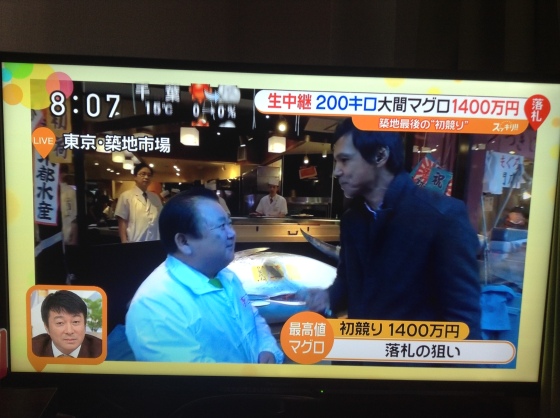 Kimura Shacho (president) of Sushi Zanmai. Proud owner of the best tuna at Tsukiji’s last opening tuna auction. Each year he brings the winning tuna to his main shop in the outer market. The shop is just behind him in this photo, with the winning tuna waiting to be cut into.