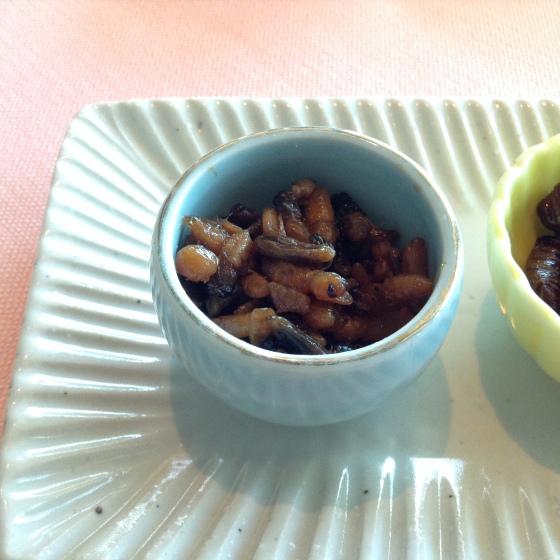 ** Note that the Nagano Insect Platter has now been replaced by the Hokkaido Delicacies (below). 16 Jan 2015

The Mandarin Oriental in Tokyo’s historic Nihonbashi district is host to one of the hottest culinary events, NOMA Japan, in early 2015. The culinary program at Japanese hotels are quite strong, and the Mandarin Oriental is an example of this. Take a look at some of the small bites served at the Mandarin Bar. Currently on the menu are regional foods from Nagano prefecture, northwest of Tokyo, a mountainous area that we love to escape to for fresh air, blue skies, soba, and saké.

I was so curious to see an Edible Insect Tasting Platter on the Snack Menu. I thought that maybe the bar menu was influenced by the NOMA team as they are famous for serving ants. I was recently served ants at Den in Jimbocho and of course it is being found on more menus around the world. I was told that one of the chefs on staff wants to feature more regional cuisine and this is an example of just that.

There are three types of insects on the tasting platter, and I have tried the locusts 25 years ago as it is also found in Yamagata where my family is from, so I thought it would be a piece of cake. I was not as brave as I thought I would be. The insects sat on the table for a long time before I could muster the courage the even attempt picking something up. I was advised to start with the bee larva, hachinoko. It was actually good. Better to not even think about what you are eating and just dig in. All of the insects are cooked in a sweet soy broth, so the flavor profiles are quite similar, it’s more about texture, at least it was for me. The baby bees were soft and quite palatable. I would go back for more of these, yes, I would.

The silkworms, kaiko no sanagi, were the hardest to try as they looked the most like an insect. If any of you have seen the movie A Bug’s Life you may feel like you are eating your friends. I assumed that the silkworm was going to be crunchy as the outer skin looks hard. These were actually soft, chewy, and not bad. Don’t judge a book by its cover. It was fine and I would eat it again.

Locusts, inago, I have had in the past, so I knew I could have it again. Of the three, these are the most recognizable insect. My aunt in Yamagata tells me that when they were kids during the wartime that her siblings would collect these and bring them to school where they would be sold for making this dish. Of the three, this was the hardest to eat, as the locusts do retain a bit of crunchiness. But the sweet soy flavor is appealing.

I believe the insect tasting platter will only be on the menu for a little bit longer. I do encourage you, if you are an adventurous eater, to come to the Mandarin Bar and go for it. If you are going to eat insects, then why not do it at a gorgeous bar overlooking Tokyo with stars in the skies.

I was told that the next featured regional food on the menu will be delicacies from Hokkaido and had a chance to try this as well. Hokkaido is the island at the north of Japan. Surrounded by waters so a rich seafood culture, but also filled with dense woods, so wild animals as well. This is much easier to dive into as everything is recognizable. The smoked oysters are creamy and rich. I was surprised that my favorite of the five was the braised bear meet and bamboo shoots, it is rich in umami. The jerky in the middle is made from venison, something I grew up with in Minnesota. The Matsumaezuke includes kazunoko, herring roe, which is not found in other regional versions of this dish, so very over-the-top. Herring roe is treasured for its crunchy texture, which is balanced with soft kombu and squid. Finally, on the far right is salmon jerky. This dish is new to the menu and will be on it for a while.

The cocktail program here is strong with many original cocktails, featuring seasonal touches, or try one of the Japanese whiskies, which are getting a lot of press for beating out their Scotch peers.

The Mandarin Bar is on the 37th floor of the Mandarin Oriental Tokyo. No cover charge.